As promised, over the coming weeks, we'll be giving an in depth look into the core elements of our programs. We'll do this anecdotally to give a sense of what we do during a typical day at the Field School while providing context and insight into why we take the approach we do.

Core Element #1: The Wander
Wow oh wow what a glorious week. With warm weather and fresh snow, the tracking has been glorious. The warmth brings out many mammals who aren't true hibernators, but who will sleep for long periods at a time when the temperature drops. When these skunks, raccoons, possums, and others wake up, they seem to be in a daze. Tonight I followed the meandering trail of a possum as it explored its world. Possums are intensely curious and have a strong sense of smell. Almost completely oblivious to the world around them, they'll follow their noses in search of food, which is pretty much anything they can chew. 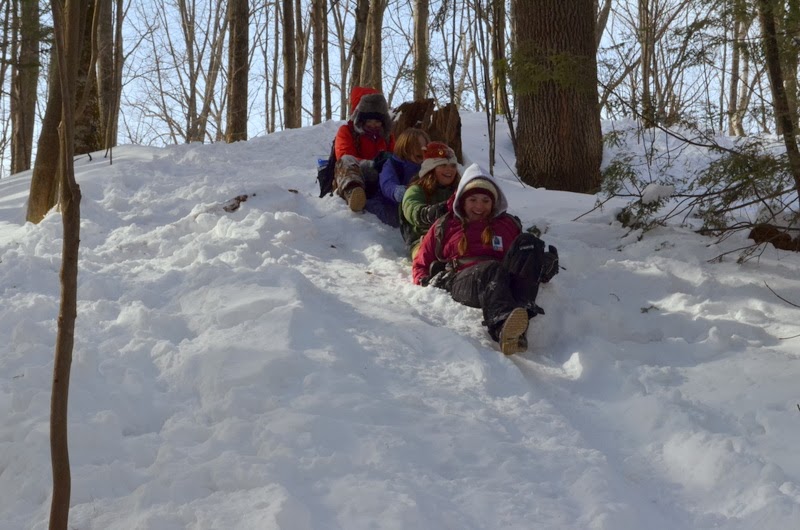 I joined Anna's guild on Tuesday. Like Possums awakening from a deep sleep, our goal was to follow our curiosity. Anna was inspired by by the smell of skunk over at Knob Hornbeam, an outcropping of bedrock sprouting gnarled old hophornbeams, and a pileated woodpecker she had seen on the walk in to set off on a wander to explore the woods southeast of camp. We started with a spark of inspiration, but without any particular agenda of things to learn or or places to talk about. The world was a blank canvas waiting to see what we might draw upon it. 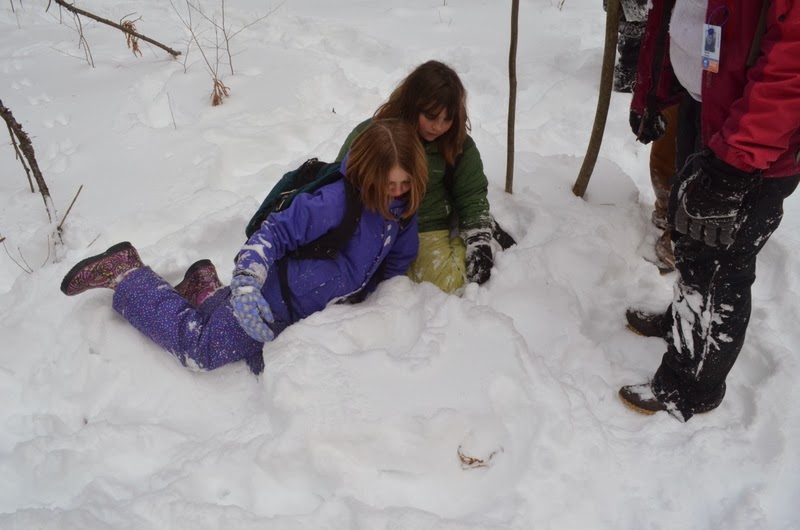 While heading over to check out a tree with fresh pileated woodpecker feeding sign, I heard Josie remark about deer tracks she spotted. A key element of the wander is to pursue an observation rather than letting it slide away into the past. This transforms a walk into an endless mystery where our attention is consciously directed towards our immediate surroundings. I followed up with Josie's passing remarking, and asked her to show me the tracks. We decided to follow the trail. The tracks ended at a sapling then jagged to the right before disappearing into a small tunnel. What started as a "deer trail" turned into a red squirrel trail that ended in a mystery. How deep was the tunnel? Where was the squirrel? What are they up to this time of year?

We're at the tail end of breeding time for red & gray squirrels. Both use scent marking to attract mates and fend off competitor suitors. We found scat and urine right next to the tunnel, and a short distance away we looked at the bark of an ash tree that had been chewed off by a gray squirrel. 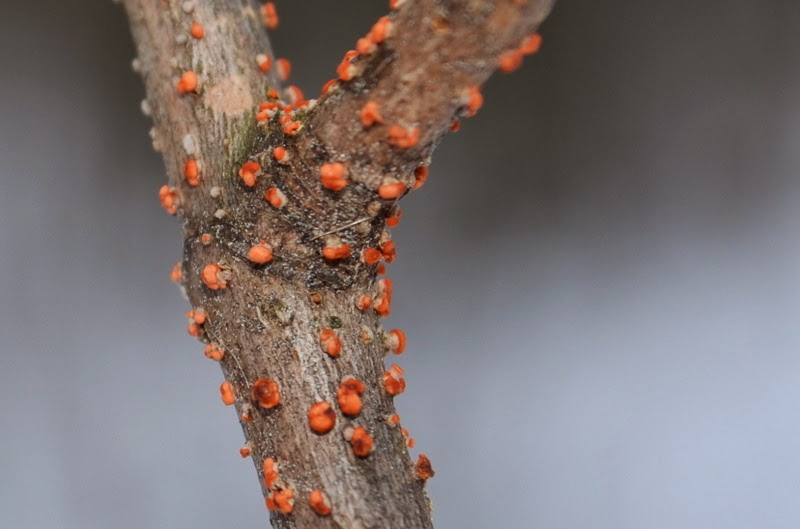 Josie spotted the fungus above at our lunch spot.I brought my camera with me and we were able to take some close up pictures of it. We described what it looked like first and then were able to get a better sense once we zoomed in all the way. The little orange knobs are the "fruits" of a fungus. Each one erupts out of a lenticel (the little mouth holes along a trees young bark where gas exchange occurs). I brought Josie over to a glossy buckthorn, which has prominent lenticels, to show her what these look like on a healthy tree. And then we went back to check out the orange knobs again. 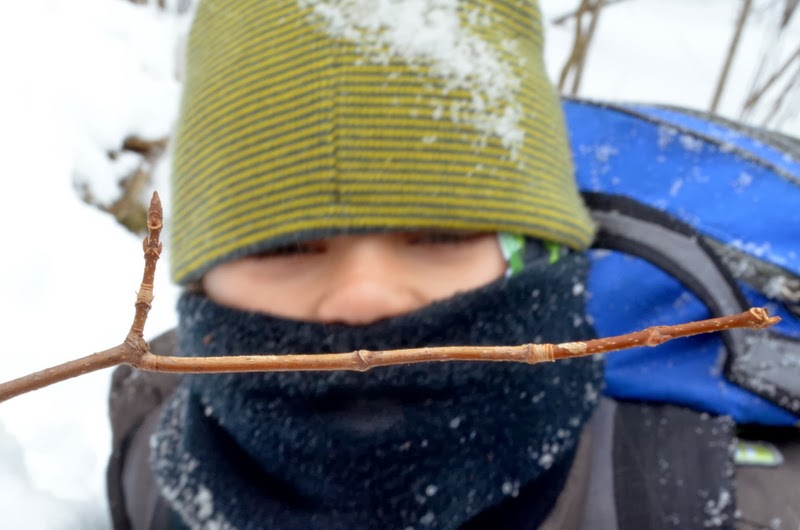 Miles and I were checking out this sugar maple twig (technically a branch, as a twig refers just to the most recent year's growth). At the end of each twig is a terminal bud, which holds a cluster of eager cells that will form this spring's new growth. Terminal buds leave a ring of scars where the scales on the bud formerly attached to the twig. Each of these clusters of rings (properly: annular rings) represent one years worth of growth. We counted back the annular rings to the trunk of the sapling and counted 7, one year shy of Miles. How old is the branch in the photo above? 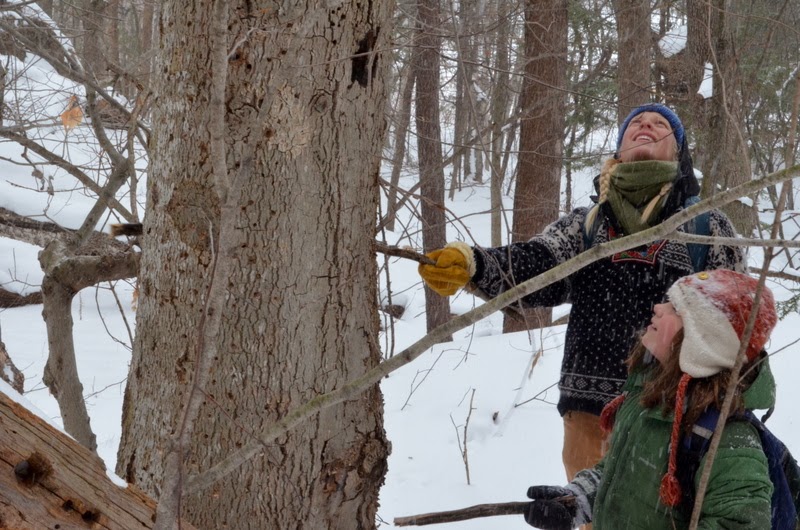 The author and inspiring naturalist Bernd Heinrich (and Huntington resident) wrote is his book, Winter World, that he would go around knocking on old trees with pileated woodpecker cavities in the hopes of drawing out flying squirrels. Like possums, flying squirrels are not true hibernators and will sleep through most of the cold. They're also whole-heartedly curious. A knocking at their tree will occasionally bring them out to investigate who's come to visit. Bernd and I successfully drew out 3 squirrels once at his cabin in Maine.

So without any particular agenda, we made an amazing adventure of the day, learned a ton, and even got to see two hairy-tailed moles tunneling through the snow! The wander is certainly an art. It takes a healthy sense of curiosity (suppled endlessly by the kids), some great questions (supplied skillfully by the staff), and a commitment to having fun.