I won't be posting new photos this week as I spent far too long editing together this "music" video from last week. The sound didn't come out all that well. The mic on my camera isn't the best and seemed to pick up the sounds of the kids in the background better than the guitar and harmonica right next to me. Anyways, I hope you enjoy!

Quinzhees and a beautiful day 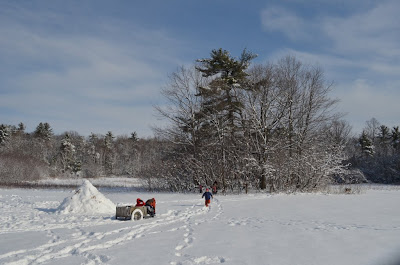 We started our day with a good game of Voles! Voles! Run For Your Lives! Here Fisher dives for some food. Rules: The game is best played in deep snow. Carve out a big circle with a small circle in the middle. "Tunnels" go from the middle to the outside. Along the outside ring there are sticks, which are the voles' food source. There are also foxes on the outside ring that are waiting to hunt voles that leave the safety of the subnivean zone. Voles have to get all the food back to the middle while the foxes try to eat them. 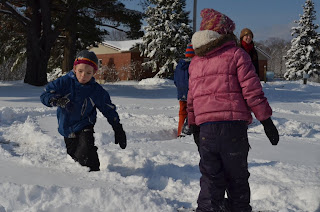 Today was one of the most beautiful days ever! We actually decided, democratically of course, that it was indeed the most beautiful day of all time. The fresh snow and baby blue sky were just glowing in concert. The pines seemed extra green and the birds were happy to be out (we spotted a merlin this morning). We celebrated the perfect day with lots of music - Ari brought his harmonica and I brought out a guitar that Sam and Nathan passed back and forth. The snow had covered our tepee style hut with a great new roof. By mid-day the clear skies had clouded over and we journeyed with our rickshaw north to the home of old man winter, who decided to give us another wondrous dusting of snow.

My guild focused on snow shelters. Led by lead foreman Emmett, we built an amazing quinzhee that could comfortably sit 6 of us. I've spent many nights in many different quinzhees, and this was easily one of the most spacious ones I've enjoyed.


Steps to build a quinzhee: 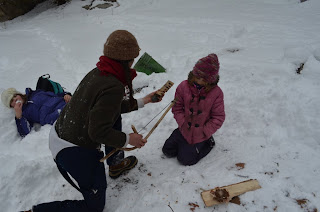 Lauren's guild had headed down to the lake to make pillows stuffed with cattail fluff. Beaven's been so excited about fire-by-friction and Lauren spent some time working with her. Below they're going tandem to get a coal using a beautiful bow that Lauren carved. 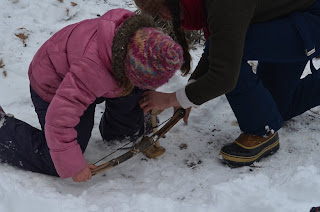 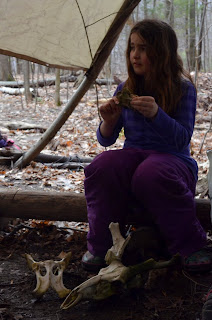 We had a wonderful week with the cold weather and rainstorm. Lauren's guild made little pillows and filled them with cattail fluff and lavender. On their wander down to the cattail marsh they found a nearly complete skeleton of a buck. At the end of each day we finish with story time. Kids share highlights from the day and the staff then asks them follow up questions to get them to dig deeper with their experiences. Isa and I were doing some forensics and deduced that the buck had died of starvation sometime in the fall. Its molars were totally worn down, and as deer rely heavily on their ability to break down food that's hard to digest by chewing it, having well-worn molars doesn't bode well for a deer's ability to get enough calories into its system. They found most of the bones but didn't find either of the lower jaw bones. 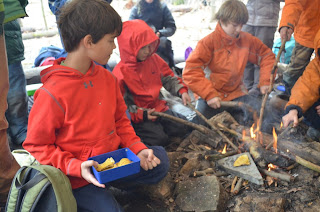 The kids love cooking pretty much everything over a fire. We had some soapstone laying around, which holds heat really well (which is why they top woodstoves with it). We use it as a "skillet". After heating it you can warm up food really well on it. Ty was cooking quesadillas, then others starting cooking strawberries, grapes, cookies, and pretty much anything else edible. We'll be working with soapstone down the road to make skillets, carvings, and other stone projects. 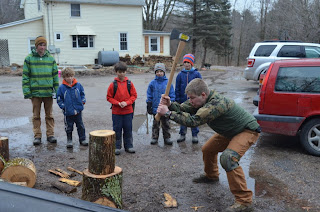 My guild on Wednesday was "using dangerous tools safely." To teach the basics of using splitting wedges, axes, hatchets, and knives, we went to Chuck's house (he's the property manager) to split wood. Fish came out for the day and gave us a great demo on how to split wood. We first split the large rounds (whole sections of a tree's trunk) into halves with a sledgehammer and wedges. We used an ax to split these into quarters, a hatchet to split it into smaller sections, and a knife to split it into kindling. 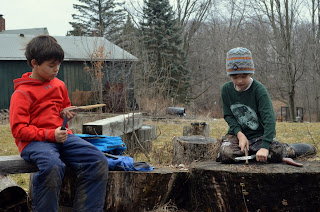 We took some of the smaller sections of white ash we had split and learned some of the basics of carving! Ty and August are working here on making little wooden knives.

Nathan and Mo (above right) got a balancing game going. They staked a sapling in the ground then added more and more branches to it. Pretty soon they had an audience and more participants. Below, basswood buds are starting to swell as the tree gets ready to leaf out. A few years back, my friend Emily Stone told me that the buds resembled a mouse wearing a motorcycle helmet. In the closeup I can definitely see that.

This week we started back up after winter break with an epic adventure (Beaven called it a Frederick Adventure). Last Fall we tended to spend more of our time around our main campsite. This session we decided that we wanted the kids to get a better sense of the land so we've spent the first few weeks exploring. Our adventure took us this week out to the Donahue Sea Caves (see map at bottom of post). The caves are accessible by boat during the summer so we took advantage of what might be the last cold weather of the season and walked along the edge of the thick ice to access the caves. We spotted fresh otter tracks on Wednesday and with the Thursday group we heard a bat inside the cave! Jackson also found some graffiti that read "J Morrison, 1858". It was awfully weathered, so it was either an older prank or actually graffiti from 1858. Also, while harvesting juniper berries, Sam, Seth and I spotted a mourning dove taking a nap. So many little highlights! 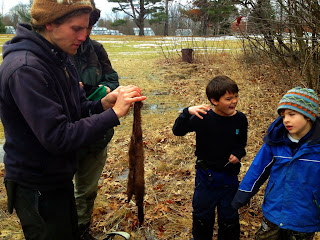 With our Wednesday I skinned a mink at the end of the day. Ty and Auggie got really into the anatomy of it and asked all sorts of great questions. Next Wednesday we'll be tanning the hide! Mink have strong scent glands, that small faintly like skunk so some of the process smelled pretty bad. They're semi-aquatic (they've got partially webbed toes) and tend to be awfully oily. The meat tastes about as bad as it smells.

With our Field School groups we headed down to the Donahue Sea Caves.

View Donahue Sea Caves in a larger map
No comments: